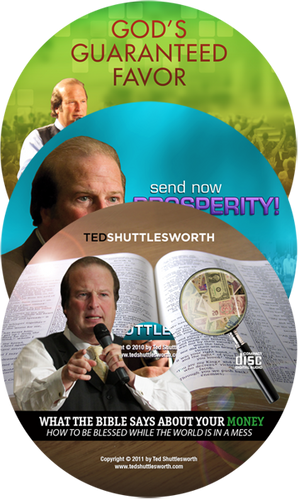 This financial pack contains the 3 messages:

The Friday night service of the West Virginia Campmeeting was powerful! The Spirit of God moved in a mighty way. The singers and band led by Ted Shuttlesworth Jr. sang “When I die let me die speaking in tongues.” The people began to praise God and notable miracles began to take place. A crippled man ran, a woman who had no eardrum heard, and the crowd’s praise vibrated the auditorium.

I preached the message on God’s Guaranteed Favor. How the Lord took His Children from slavery and they did not leave the land of bondage empty, but they went out with a full supply. Get this CD!

This was the prayer of King David as he prepared to take the throne of Israel. When David asked God to send him prosperity he had nothing in the natural.

Yet, before King David died he gave one of the largest offerings that was ever recorded in scripture to build God a house. No one has given this large of an offering even until this day.

• WHAT THE BIBLE SAYS ABOUT YOUR MONEY

What the Bible says about your money is a message you need to hear. It is VITALLY IMPORTANT that you understand what God is doing to bless your finances.