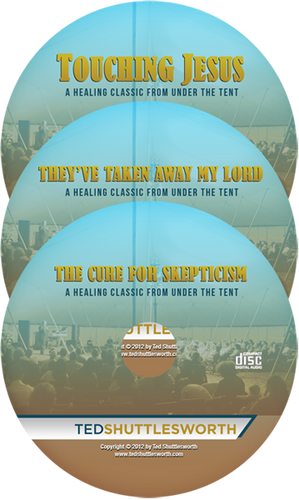 This healing pack contains the 3 messages:

The Bible says that Jesus can be touched with the feeling of our infirmities. He knows what you’re going through, especially when sickness or disease comes against you or your loved ones.

TOUCHING JESUS is a message of faith that I have preached in crusades around the world. There is a key for healing in this message that releases the anointing and many have been instantly set free!

• THEY'VE TAKEN AWAY MY LORD

I preached this message in Dallas, Texas under Brother Schambach’s tent. The Lord had me deal with the thought that there are churches who no longer allow God’s Spirit to move.

THEY’VE TAKEN AWAY MY LORD follows the women who found an empty tomb and carried the message of Christ’s resurrection to the disciples. They became the first evangelists and that message still moves people today. Get this faith-building message today!

• THE CURE FOR SKEPTICISM

Skepticism is born out of unbelief. One of the greatest hinderances to receiving healing comes from skepticism. I saw a woman who was blind that came for healing in Toronto. The evangelist prayed for her in an unusual way. She asked him to spit in her eyes just like the Bible story in John 9. Then I led her back to her seat. A woman on the aisle said,“I don’t believe that.” Just as she spoke the woman who was blind received sight!

The Cure For Skepticism will show you how to guard your heart and position you to receive from God.